Within a couple of days Oppy will have reached her next “pit stop” along the road to Endeavour – a fresh (perhaps as young as a mere thousand years old, according to NASA) crater on the Meridiani plain which has been christened ‘Concepcion’. We’ve been seeing the crater getting bigger up ahead for about a week now, changing from a mere dark stain on the far horizon to an intriguing spread of dark rocks standing against the lighter dust dunes. Now, we’re one more day’s driving, two at the most, away from the crater itself, and there’s little doubt that when we reach it we will be in for a visual treat – lots of large, dark rocks, surrounding and piled up on the inside rim of a young(ish) crater. But that’s not all we’ll see; we should see more features on the horizon, specifically the hills that make up the rims of Endeavour Crater itself, and Iazu Crater, which lies even further to the south.

So, now seems like a good time to remind ourselves where we are, before things get too crazy!

Here’s where we are (click on it for a larger version, as usual): 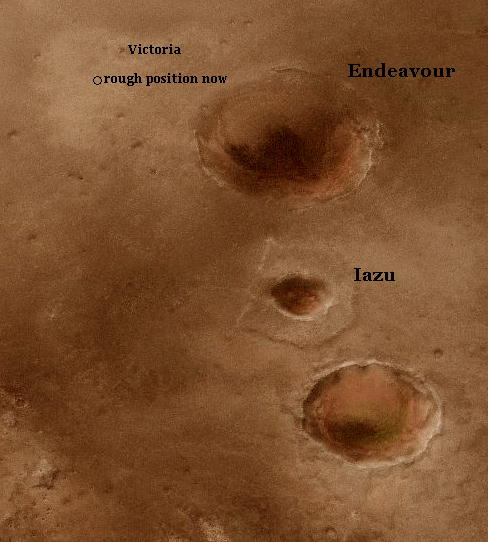 You can see we’ve come quite a way from Victoria already, but have a long, loong way to go before we reach Endeavour. That’s why ‘pit stops’ like this one at Concepcion are so important: they give the rover a chance to rest and catch its breath (I know it doesn’t have any breath, it’s a machine!), and also to do some science too. Doing the science is important because, although many rover fans refuse to acknowledge it, the truth is that Oppy could just fail any day, without warning, so ignoring any interesting-looking rocks that appear in our way would just be stoopid. It will be a long time before anyone or anything comes this way again, before any of these rocks, meteorites or outcrops are studied, and every single one of them could be The One that crowns the entire MER mission because it contains something amazing scientifically. ( And no, I don’t mean a fossil, I mean some obscure mineral or chemical trace that makes the scientists go “WOW! Look at that! If that’s there then…”

But back to Concepcion. Why was it called that? Well, ‘Concepcion’ was one of the five ships in explorer Ferdinand Magellan’s fleet, and there’s now a tradition of naming features in this part of Mars, explored by Oppy, after people, places and objects from Magellan’s epic story.

As I said, Concepcion is now just one drive, maybe two drives, away. Here’s a 3D view made from the latest images that came down last night – and yes, if you click on the image a bigger version will appear… 🙂 :

There’s clearly a LOT of rocks all waiting for Oppy up there! Many look as big as Marquette Island to me. Perhaps Marquette actually came from here? We might know soon…

And as I said at the start of this post, there’s a chance that we’ll be able to see a lot more vertical relief on the horizon once we reach Concepcion – i.e. hills again! We’ve been starved of hills for a long time now, but finally we’re starting to see some again. Some belong to Endeavour, some belong to Iazu, the crater to its south. Here’s a contrast-enhanced crop of one of the raw images received last night… 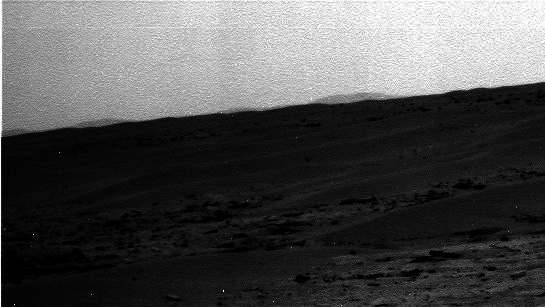 See the hills? They stand out a little more clearly if you stretch the vertical scale of the image… 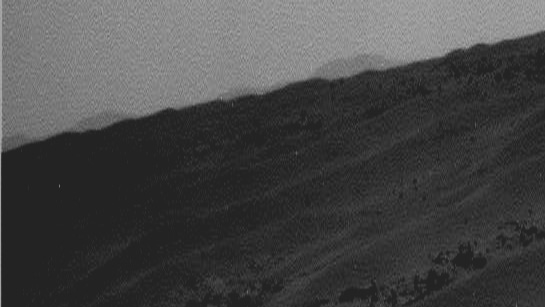 What more will we see when we get to Concepcion? Well, personally I’m not too sure we’ll see a LOT more; there seems to be a lot of dunes beyond Concepcion. But I’ll be happy to be proved wrong! 🙂

So, here we go again, roving on towards a new amazing place on Mars. I know I’ve stuck up for stopping and studying meteorites and rocks earlier in this post, and I always will, but I’m enjoying the anticipation of seeing new things on the horizon too. It’s an almost primal thing, isn’t it? How many of you reading this blog (and thank you for stopping by, by the way!)  love being on ships just so you can stand outside, leaning against the railings, looking out to sea, waiting to glimpse a line of land on the horizon? How many of you. my dear fellow Oppy companions, go hill climbing, and aren’t happy until you reach the summit and can see the next hill, and the one beyond that?

This appears to be something we really have no say in. Think about it. As babies we fight and struggle from day #1 to stand and see our new world from just a couple of feet higher. As kids we climb trees so we can look out over the park and see the houses beyond. Older, we seek out top floor restaurants to dine in, and pay to ride on big wheels, for the view.

And that’s what makes following the missions of Spirit and Oppy so exciting and exhilarating. We’re all standing together on the deck of a virtual ship, sailing over the martian dune seas, looking out for the next wonder to appear on the horizon.

What an amazing, golden time! 🙂