Opportunity gets a neighbour…

After all these years of being alone on the Meridiani Plain, Opportunity is about to get a neighbour on Mars.

Later this week a lander called Schiaparelli, built by the European Space Agency, will come down on Mars somewhere to the north and west of Endeavour Crater. As you can see from ESA’s graphic showing the lander’s landing ellipse (which I’ve cropped and labelled), here…

That’s a big oval, isn’t it? The chances are Schiaparelli will set down many miles from Opportunity, but it might… might… come down as close as 6 miles away. Not that that matters; Opportunity would never trundle down off the Endeavour rim and go find the new arrival – there’s absolutely no reason to. But that’s close enough to mean there’s a possibility Opportunity might see Schiaparelli’s arrival at Barsoom, might spot its meteoric path across the sky as it enters the atmosphere, which is why Opportunity has recently been taking photos towards the direction of the European lander’s planned landing site. If Oppy catches anything (and it’s a HUGE if!) it will just be a scratchy bright line across the sky, if that. But it’s worth a go; if it comes off it will be a very cool picture –

– which is one more “cool picture” than Schiaparelli itself will take on Mars, because it doesn’t have any cameras for taking photos of its landing site IF it lands safely.

I know what you’re thinking…

…and I’ll be honest, that was my reaction too when I heard, months ago, that Schiaparelli wouldn’t be taking any photos of its landing site once it was down on the surface. It does seem insane, doesn’t it? To go all that way, make it through the atmosphere, land safely and then NOT send back any images from the surface, not even one? When I read that I thought it was one of the dumbest things I’d ever heard, and part of me still feels that way, to be frank. It just seems wrong for a lander to not send back any images from the world it’s landed on. It feels… unnatural, like an incredibly wasted opportunity. And I wondered at the time if ESA hadn’t learned anything from the landing of the Huygens probe on Titan, which was just programmed to take a single pic with a low resolution grudging afterthought of a camera, but in the end survived long enough to have taken many more.

( Of course, ESA has actually already landed a probe on Mars… Beagle 2. Ok, it wasn’t a totally successful landing, but it did make it to the surface, and those images taken a couple of years ago now suggest it made it down pretty much in one piece. But I don’t expect you’ll hear much about Beagle 2 this week as Schiaparelli approaches and then (hopefully) lands on Mars. To ESA, Beagle 2 seems a bit like Voldemort or Macbeth – a name no-one dares speak out-loud… )

And we have to be okay with the lack of pictures, and not make it a “thing”, even though it will seem like a huge wasted opportunity on Wednesday. Not every space mission has to be about taking pretty pictures; some have to just collect data and information which will have the engineers and flight controllers jumping in their seats and rubbing their little biro-stained hands with glee, yet be of no interest to our eyes or use to our brains at all. The data sent back by Schiaparelli will be absolutely invaluable to the hard-working teams at ESA planning on landing the Exo-Mars rover in 2018. So, ok, yes, a picture of another landing site on Mars would be great… it’s always great to see a new place on Mars… but, frankly, we don’t need it, do we? Really? And obtaining and returning that landing data is much, much more important than taking and sending back a few images of the landing site, especially as it will probably look a lot like the landscape Opportunity drive through to get to Endeavour years ago.

So. Suck it up everyone. This is a mission for the scientists and engineers, not for us. And that’s ok. We’re spoiled rotten with images from Mars -they are sent back daily not just by Opportunity, but also by Curiosity and many orbiters too. And if Schiaparelli is fated to stare out blindly across the martian landscape for the three short sols of its mayfly life in order to improve the ExoMars rover to land safely on Mars then so be it.

And Schiaparelli will actually do some useful science on Mars! 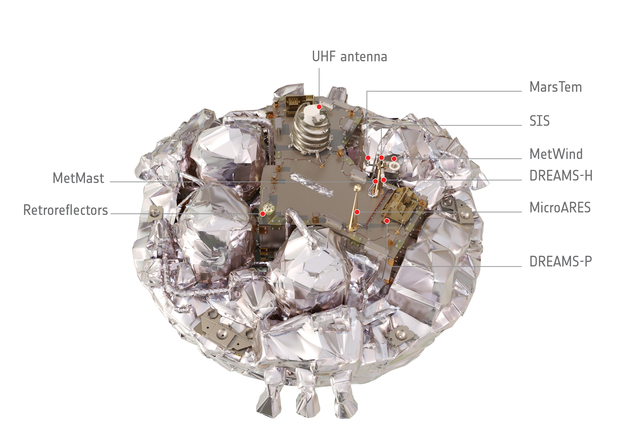 Its DREAMS (GREAT acronym! Well done that meeting!) package will tell us about the martian weather and properties of its dust. Details here. And you can read more about Schiaparelli itself on an ESA website here.

So, Wednesday is the big day. Will Opportunity witness and record the fiery arrival of her new neighbour? Check back and find out. 🙂