One of the greatest successes of the MER mission has been the way its images have been released almost in real-time, published on the web just a matter of hours after being taken on Mars. In stark contrast to some other missions – hang your heads in shame the scientists who horded the images taken by Rosetta after it flew past Mars, images which the public deserved to see, seeing as they paid for them – the MER mission has embraced the idea of non-scientists taking the images produced by Spirit and Oppy and manipulating them, enhancing them, and joining them together to make beautiful mosaics, panoramas and more. I know for a fact that the scientists behind the MER mission could not be happier that people are creating these new pictures out of the raw data produced by the mission, and I believe that apart from the incredible science, of course, the lasting legacy of the MER mission will be the way it allowed the public to become so actively involved with the mission. This is how it should be, and how it will be done – mostly, there are still some dinosaurs – from now on.

This was brought home to me the other day when I saw an image on UMSF produced by one of the most skilled and talented “Image mages” I know, Damien Bouic, who posts under the name of Ant103 on the forum. Like I do, he takes the raw black and white images taken by Oppy, taken through red, green and blue filters and turns them into a single colour image, recreating… very roughly… the view we would have if we stood there beside Oppy.  And just like I did, a couple of days ago Damien took the raw black and white images of her view over Endeavour Crater, including ones showing her own shadow, and turned them into something different. I did the same thing, and my attempt didn’t turn out too badly. You can see it in a previous post. But Damien turned those raws into something… something magical, and I don’t use the word lightly.

When I made my image I really had a Moment. Seeing the shadow of Oppy on that ridge, even though it was just a vague smudge of a blur, was quite moving. I was, in my own little way, really proud of the image I’d made, and I still am. But what Damien did… well, it had, and still has, me shaking my head in disbelief. He has created what I think will be one of the landmark images of the MER mission, it’s just a work of art and a thing of beauty.

Before I show it to you, let’s take a look at the images used to create it. From scratch. 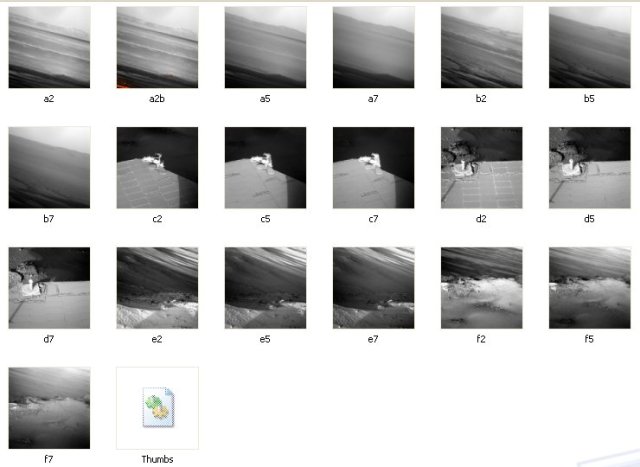 See? Nothing dramatic there. Just unremarkable black and white images, taken through different colour filters. And yet… Damien waved his magic imaging wand over them, whispered some kind of incantation, and after a puff of smoke and a clap of thunder THIS appeared… 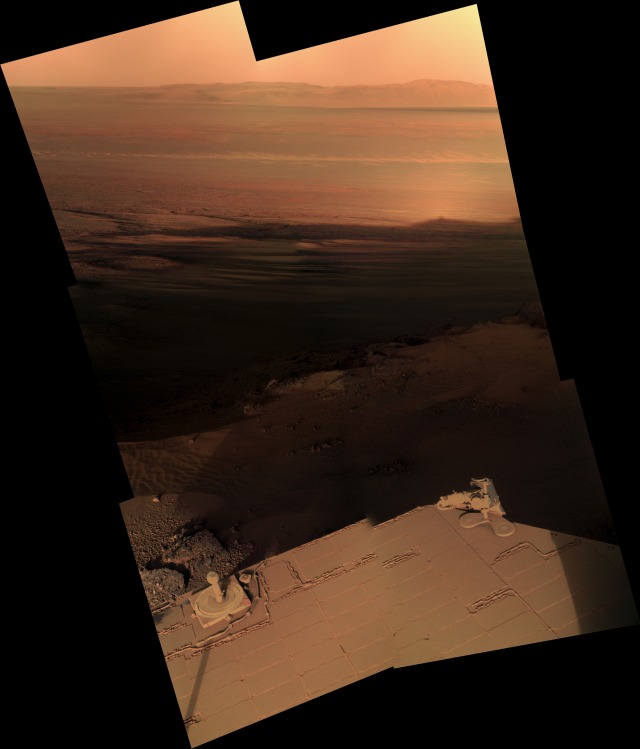 Isn’t that something? Just click on it to enlarge it, and you’ll see the glowing halo around Oppy, a kind of martian “glory”, and you might even convince yourself, as I did, that you can see Oppy’s actual silhouette on that image, even though that’s impossible… right?

Enjoy that image. Savour it. Drink it in. That’s Mars, right there. And that’s the MER mission, right there: a rover, standing on a hilltop, looking down on and across an enormous, ancient crater, taking its own portrait and beaming it back to Earth for all of us to see.

8 Responses to Mars for everyone…