Time for Oppy to take a breather…

Seven years after landing on Mars, Oppy is taking a well-deserved rest, standing still near the edge of Santa Maria to conduct an in-depth study of an exposed plate of pale, ancient bedrock, “Luis de Torres”, that was altered by water many millions of years ago. She won’t be moving at all for a few days; she’ll just be pressing her electronic nose up close to a small, circular area of rock that she brushed clean of dust with her whirring brush a few days ago, shown in my colourisation here… 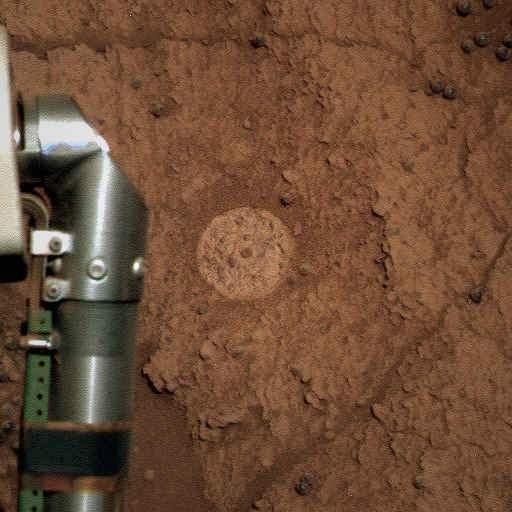 In doing so she’ll discover a great deal about what the rock is made of, and how it has changed in the past.

So why has Oppy just parked up, put her wheels up and decided to take a breather?

Well, because Mars is currently slipping behind the Sun as seen from Earth, which means that between Jan 27th and Feb 11th the rover team won’t be able to communicate with Oppy as often or as clearly as they usually do. Instead they’ll talk to Oppy in a much more limited way, and will send her a “to do” list, which she’ll work her way through. She’ll still send info back to Earth, but not at the rate she does usually, so there won’t be a lot to write about for me here for a fortnight or so or for you to read or see.

But when the communications situation returns to normal Oppy will spend a few more days looking at and photographing Santa Maria before turning towards Endeavour and heading for it as fast as she can. And with very flat ground and no more major landmark features between her and Endeavour she’ll have very few distractions or delays, unless something unusual or interesting ( cough… meteorite… cough ) appears on the ground ahead, and might reach Cape York, a small rocky “island” on the rim of Endeavour, in a few months.

So, time for Oppy, and all of us, to relax and just take a breather. You can find the full NASA information release about conjunction here.