Oppy is now on course for Santa Maria, the “base camp” for her final assault on Endeavour crater. Although new images of the Santa Maria have yet to be posted on either the NASA MER site or Exploratorium – our main sources of images from the Mars rovers – I’m sure that when they do appear they’ll show more of Santa Maria’s rim poking up into view above the local horizon. I’m rewally looking forward to seeing the crater “materialise” before our eyes, just as Endurance crater did all those years ago… 🙂

So, what lies between where Oppy is now, and the edge of Santa Maria? Well, a lot of flat ground, a couple of “lilly pads” of exposed bedrock, a handful of little craters, and a few ‘trenches’ that will need to be driven around – not far, just little diversions. In fact, if they weren’t there, Oppy could pretty much drive to Santa Maria in an almost-straight line, just deviating from that line a couple of tims to take account of the aforementioned craters and trenches.

I’ve made a chart showing the ground ‘up ahead’ for Oppy. You have click on the image below, then scroll upwards from the bottom, following the track (which is, I have to stress, just my own rought best guestimate of one possible route for Oppy, I might well be waaay out!) up to Santa Maria at the top. Features to be avoided are ringed in red.

As you can see there’s nothing major in the way for Oppy – and the view as we approach Santa Maria really should be something..!

Finally, for this time, a colourised look back to Sol 2419 (Nov 13th) when Oppy was taking a good hard look at some of the rocky pebbles scattered around Intrepid crater. Here’s what she saw… 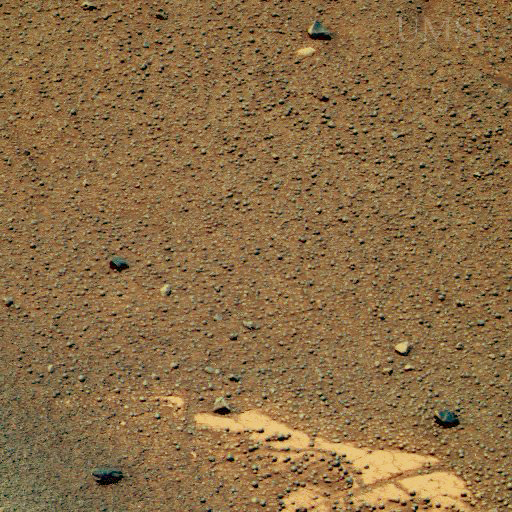 Those new views of Santa Maria should be in soon. 🙂

1 Response to The road ahead…