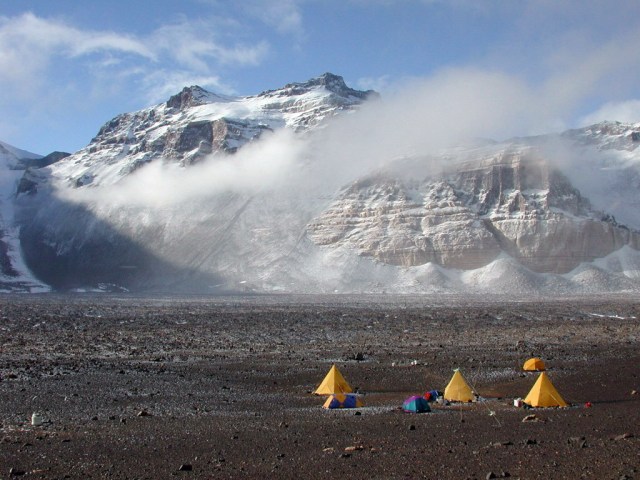 With Santa Maria now appearing in the distance – we can’t see it clearly yet because it’s in a dip in the local terrain – now is a good time to take a look at what we’ll see when we get there, in around a week’s time.

Santa Maria is the largest crater Oppy will have visited since leaving Victoria, all those months ago, and it will be Oppy’s last stop, her last chance to “catch her breath” as it were, before she puts her head down and strikes out for the rim of Endeavour, almost 8km further away. At Santa Maria the MER team will, I expect, take at least a few sols to give the rover a rest after the hard driving she’d been doing recently, and make studies of the rocks around the crater to see how – or if – they differ from the rocks seen further to the north. So, basically, I think Santa Maria will be used as a “pit stop” to check how Oppy is before pointing her nose at Cape York and telling her “Drive, drive, drive…!”

Santa Maria isn’t just another crater. Santa Maria is nothing less than the base camp for Oppy’s final assault on Endeavour crater.

Even a casual glimpse at the images of the crater taken by MRO’s HiRISE camera shows Santa Maria is rich in features, inside and out. Click on the next image for a full size version…

Looking at that picture you can see there are many, many large blocks of stone scattered around it (yellow areas), some almost as large as Oppy herself. There are two large areas inside the crater covered by dust dunes (blue areas), in fact the northern third of the crater floor is covered in a ‘wall’ of sloping dust dunes. The crater’s edge is jagged and broken, like a mini version of Victoria, with several bays and capes (orange areas) for Oppy to drive up to and explore, and there’s a large rocky overhang on the northern edge of the crater (green area) which looks like it has some fascinating rocky ledges and blocks within it. Lots to keep Oppy busy there!

Within another few days we should have our first clear look at the crater and its surroundings, as Oppy reaches the highest point in the local topography and looks down on the lower level of the plain. We should be able to see the whole crater, and the largest blocks scattered around it, by the weekend, and honestly, I can’t wait to see Santa Maria with Endeavour’s hills on the horizon far behind her, that will be an amazing view I think, maybe even one of the highlights of the mission so far.