A chat with Scott Maxwell… 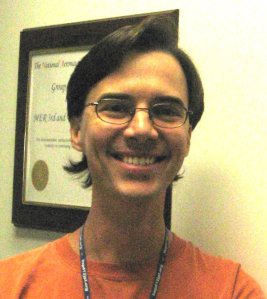 As Oppy heads towards Santa Maria – which will almost certainly be her final “pit stop” of any length before she strikes out for Cape York on the eastern rim of Endeavour Crater – I thought it might be a good time to chat again to Scott Maxwell, one of the Mars Exploration Rover drivers, about the success of the mission so far, recent events, and what the future might hold for Oppy as she treks on towards her date with destiny on the edge of Endeavour. Scott’s a good friend of this blog – and I’m very proud to say a friend of mine, too – and, as always, he was very generous with his time, even though he must be unbelievably busy preparing for Oppy’s arrival at Santa Maria (Scott explains himself just why he is so happy to make time for things like this at the end of the interview), so I’m very grateful to him for answering these questions for me…

1. How does it feel to have all the rough-and-ready ground behind you, and mostly smooth-and-rover-friendly terrain ahead of you? I imagine it’s a bit of a bitter-sweet feeling – glad to be getting closer to Endeavour, but sad to leave all that lovely, science-rich bedrock behind?

Well, let me put it this way.  We’re on Mars to do science, and the more science we do per unit time, the better.  But I’m never *un*happy when doing the most science per unit time means we need to drive a long way really fast, and spend our energy figuring out better and better ways to do that.  🙂  Just this weekend, we’re trying an experiment that, if it works — and it should — will improve our autonomous driving rate by 20%.  I’m pushing to get us to 140 meters per sol, double what we had been doing, and that’s just within reach; this experiment might be what gets us the last little bit of the way. So I’m having plenty of fun working with the team to think up ways to just get there as fast as we can — this can go on for a long time, as far as I’m concerned!

Besides, as sweet as it might have been, we saw a lot of that bedrock, and we’ve got cool new stuff on the horizon now.  The sooner we get there, the sooner we can be exploring it.

2. It was a lovely gesture naming the craters Intrepid and Yankee Clipper after the Apollo 12 spacecraft. How strong a connection to the historic space missions of the past does the MER team feel – and how does it feel to know that one day the MER mission will be thought of by some people with as much love and reverence as Apollo?

As much as MER means to me, I’m not sure I’ll ever feel we’re quite in the same rank as Apollo.  Admittedly, part of that feeling might be because I’m doing this mission and I didn’t do Apollo (most of Apollo happened before I was born), and since I see this mission up close and personal, it doesn’t have quite the same aura for me that Apollo did. I definitely think that many of the people I work with would have been very much at home on that mission, though: amazing, world-class engineers and scientists, people I’m very lucky and privileged and proud to work with.

I can only hope we come to mean as much to people as Apollo did – and does.  Anywhere near as much. 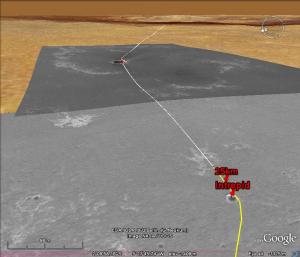 3. There’s a *lot* of nothing between Santa Maria and Endeavour; are there any MER team members who, like me, are hoping for more close encounters with some meteorites, just to break the monotony, or is there a real determination to just drive hard now and distractions would be unwelcome?

I can only speak for myself, but frankly, the less shiny stuff the science team sees between here and Endeavour, the better I like it!  I want to make absolutely the most of the great driving season we have stretching out in front of us, so the more days we spend driving and the fewer we spend stopped for science *now*, the more we can spend on science when we get to Endeavour.  Think of it as an investment in our eventual Endeavour science — fewer meteorites now means more phyllosilicates later; a good trade! 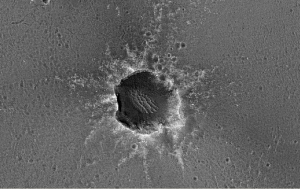 4. Now Oppy is closing in on Santa Maria, what are you most looking forward to about arriving at that crater? From the HiRISE images it looks like some very big blocks of ejecta are scattered around it, some bigger than the rover itself, so are you looking forward to seeing those?

I think Santa Maria will be a fascinating waypoint on the way to Endeavour — I just hope it doesn’t slow us down too much.  But what are you gonna do, just skip it?  If we didn’t have Endeavour beckoning us to the horizon, we’d be all over Santa Maria, so we might as well give it its due.  I guess my personal hope is that Santa Maria gives the science team just enough to keep them busy analyzing data while we complete our trek to the big one! 🙂

And of course, Endeavour is looming ever larger. What are your thoughts as Oppy gets closer and closer to that mighty crater?”

Rover driver extraordinaire Frank Hartman and I have talked a lot about how both rovers can be thought of as having had multiple missions — for Opportunity, Eagle was one, Endurance was another, the “etched” (rippled) terrain was another, Victoria was another, and so on.  Endeavour will be yet another one of those, and probably bigger, more varied, and more spectacular than anything Opportunity has seen to date.  Nearly seven years into our 90-day mission – probably closer to eight years by the time we get there — we’ll still be feeling like we’re into something brand new.  Big rocks?  Hills to climb?  All-new science?  I’m definitely, definitely looking forward to all of it, and even more to the unknowns we’ll face once we’re there.

5. Obviously SCIENCE is the priority, and Oppy is a geologist not a tourist, but as the beautiful hills of Endeavour loom ever larger, and are so beautiful and dramatic, are there any plans, or just hopes, to take some more artistic shots of them? Sunrise? Earth shining above them? After all, we – Mankind – won’t pass this way again for a long, long time. Is there any longing to take a classic “Ansell Adams” portrait of Endeavour?

*sigh*  I’ve often said that every space mission should be assigned a poet.  We’re lucky to have you as our unofficial one, but we haven’t got an official one to look out for opportunities like that.  Thanks to Paolo, we’re regularly taking pictures of Endeavour as we approach, but they tend to be catch-as-catch-can — if we get something really poetic or dramatic, it’ll be more a function of luck than planning.

Having said that, I did get an invitation — I think it might even have been a serious one — to design an astronomy observation for Opportunity, so maybe Earthrise over Endeavour would be a good start!

6. Finally, how does the team feel, after all these years, about the huge public interest in, and support for, the rovers? So many people following Oppy as she treks across Meridiani… so many people hoping Spirit phones home and is free soon… Do you follow the forums, blogs and internet sites where “rover huggers” talk about Spirit and Oppy?

I mostly devote my personal energies to Twitter — it’s just what I have time to check in on at random times during the day, when I’m running over to the cafeteria or whatever.  (As you know, I’m @marsroverdriver on Twitter, for anyone who wants to follow me there.)

I wish I had more time for other forums such as UnmannedSpaceflight.com.  Fortunately, although I don’t have much time to hang out there myself, rover driver Paolo Bellutta does – and believe me, you’re better off with him than you would be with me, anyhow!  He’s the best.  I suppose that, as a team, we manage to cover a fair number of the available outreach opportunities that the Web has given us, and I like it that we’re able to connect with our fans in this way.

I’m very grateful for the public interest in this mission, and I try to do right by it.  I’m very, very much aware of how I grew up on the other side of that wall, constantly craving any information I could get my hands on about the missions I was interested in.  Now that I am where I am, I do my best to be the guy I would have wanted on *this* side of that wall — to try to give people some insight into the mission and its people, maybe to share enough to make the wall disappear.  I do my best, anyway.  If I’m doing nearly as well as I hope I am — and if Paolo and others are doing the same, often much better — then our fan club can truly ride along with us every step of the way, all the way to Endeavour and beyond.

Thanks again to Scott for talking to “Road to Endeavour”! 🙂

1 Response to A chat with Scott Maxwell…